Adrenaline Junkie: a person with a compulsive desire for excitement and adventure!!! That pretty much sums up my personality… I’ve jumped out of a plane at 3000 feet, been to (160ft) in the blue hole – pushing the limits….. wrestled crocodiles (with supervision of-course)… and the list goes on.

As such, I guess it came to no surprise that when Tropic Air invited us to experience their new adventure – The Black Hole Drop – I was volunteered to represent!!!

Our morning started pretty early. Arriving at the local terminal around 8:30am, the remainder of the FamTeam slowly trickled in… “Hey – there’s someone I recognize – the Scoop.” Rebecca was the first to arrive, after me. We chatted about our impending adventure – me sharing my excitement and she sharing her dread!!!

At 8 am, we board our flight en route to Belmopan. The fly over to Belmopan was really enjoyable. We had a chance to experience the morphing of the terrain as we moved from shore line to mountains. Passing over huge fields of citrus and green vegetation, admiring the Belize river as it twists and turns, the towering mountains in the Horizon all provided for a very scenic flight.

In Belmopan, the capital city of Belize, we were greeted by Cave Branch’s representative in their mini-van. A short 15 – 20 minutes’ drive along both the George Price Highway and then the Hummingbird Highway and we found ourselves at the entrance pathway of the Jungle Retreat.

After signing our lives away – it’s time to start our journey. Long pants and tennis shoe are a must to do this trip. OH, and ton loads of bug spray. We leave the comforts of air condition and board a pre-historic (it may seem) mini school bus and head out to our point of entry for the commencement of our hiking experience. 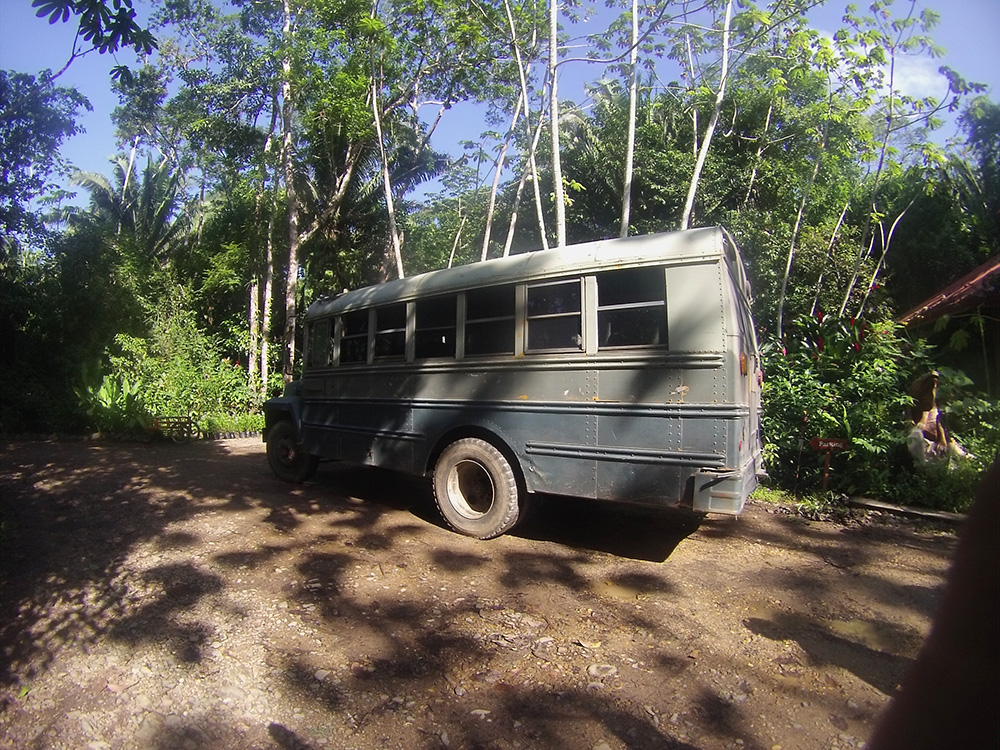 The Hike to the Mother of All Caves (Actun Loch Tunich). There was a considerable amount of rainfall in the country just prior to our trip – so the terrain was quite adventurous.

Time to pack your gear. The company provides back packs with a helmet and ropes. I was curious as to what the ropes were for but didn’t think to ask. They also provide you with water. I’d recommend taking about 3 liters – depending on how much water you consume. It could get pretty hot.

Watch the first slope as you start. I must have slid about 8 inches before re-gaining my stance. This was the first of many. Expect a couple scratches – even the more fit – come out with some physical evidence of the journey.

Thick jungle surrounds you as you make your way through the path. There is about 3-4 rest stops on your ascent. Bear in mind, you are going up hill and down-hill – some are so steep that it requires that you crawl. 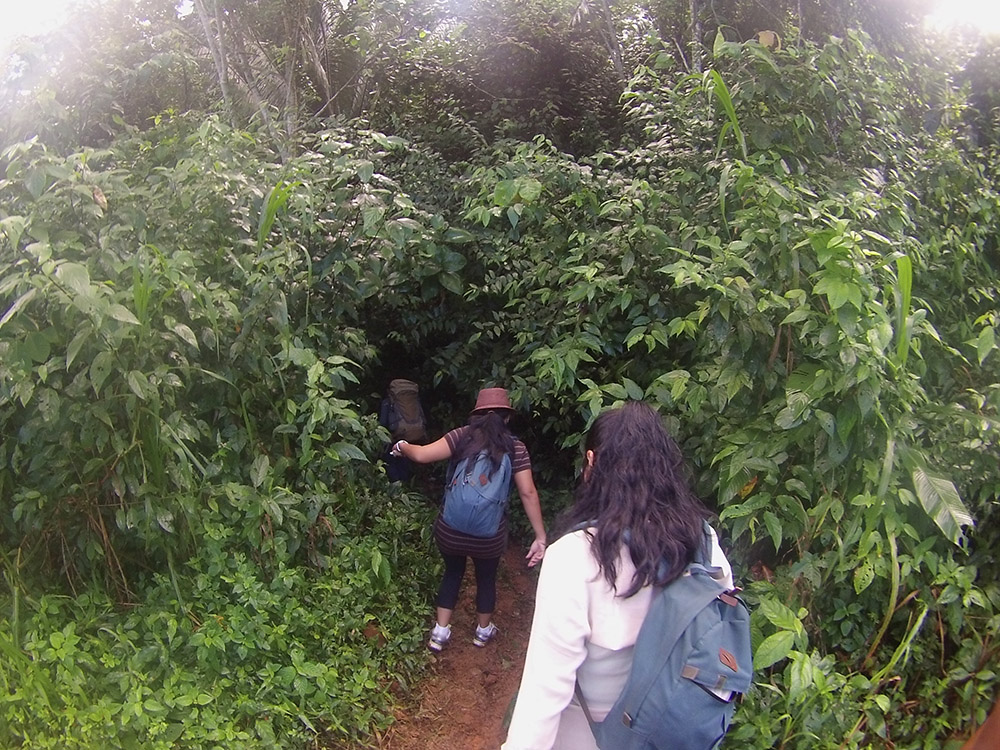 After about an hour and a half (time depends on collective fitness of the group – could be shorter or longer) climbing over rocks, slipping down muddy slopes, plotting where you’ll place your foot next – we were at the summit of Actun Loch Tunich. 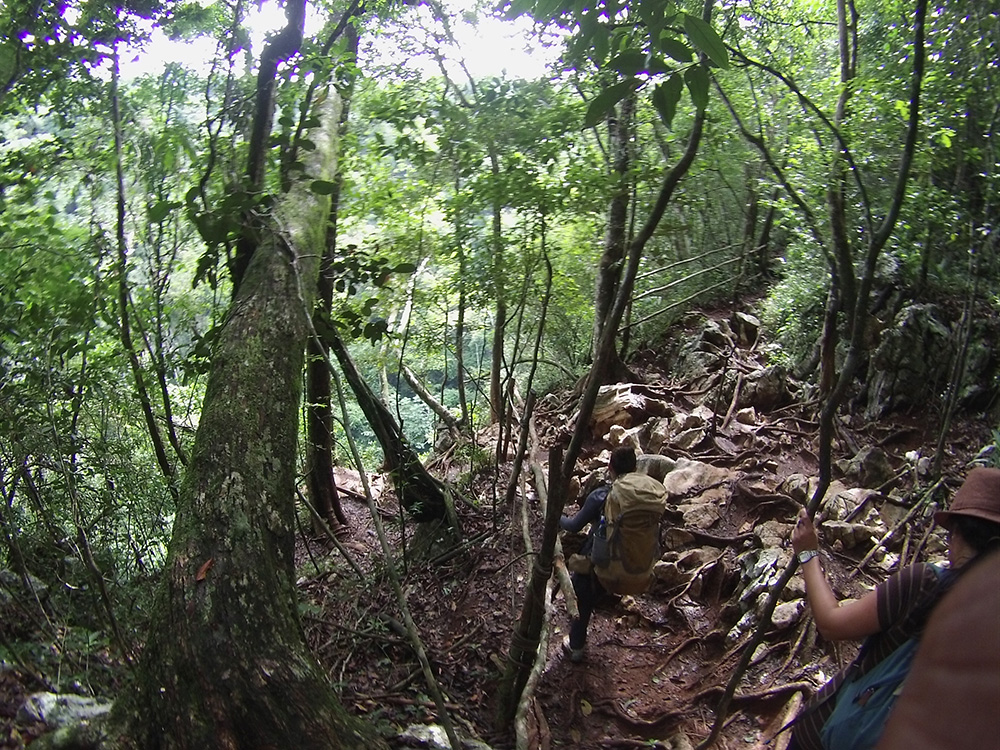 “Okay, so I just take a rope, get fitted and go for it right? Naw”. Our guide gives us a 10 minute instruction of exactly how the descent would be. Everyone was super attentive. My feet were itching to just ….GET STARTED ALREADY!!!! I believe I might have even voiced that thought out loud. 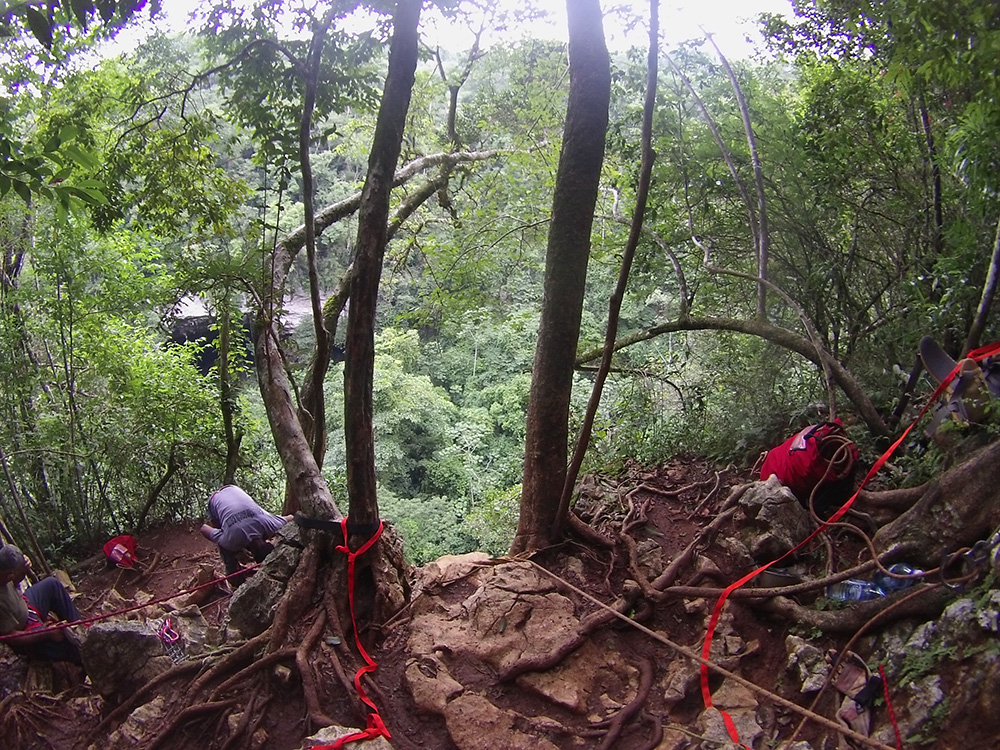 As expected, my fearless companion Tatiana and myself, were the first to brave the slope. Adrenaline increasing as I make my way to the edge of the cliff. Teeny steps, ….step by step – backwards – “don’t look back” – I keep repeating this to myself.

As I reach to the edge and I was instructed to assume a 180 degree angle, the fear and adrenaline mounted. “The only thing keeping me from a 300 feet free fall plummet and a crap load of limestone is this tiny rope” (which I was assured collectively can carry over 10000 pounds) “and I’m only 100 plus pounds (smiling sarcastically). ” I thought to myself. 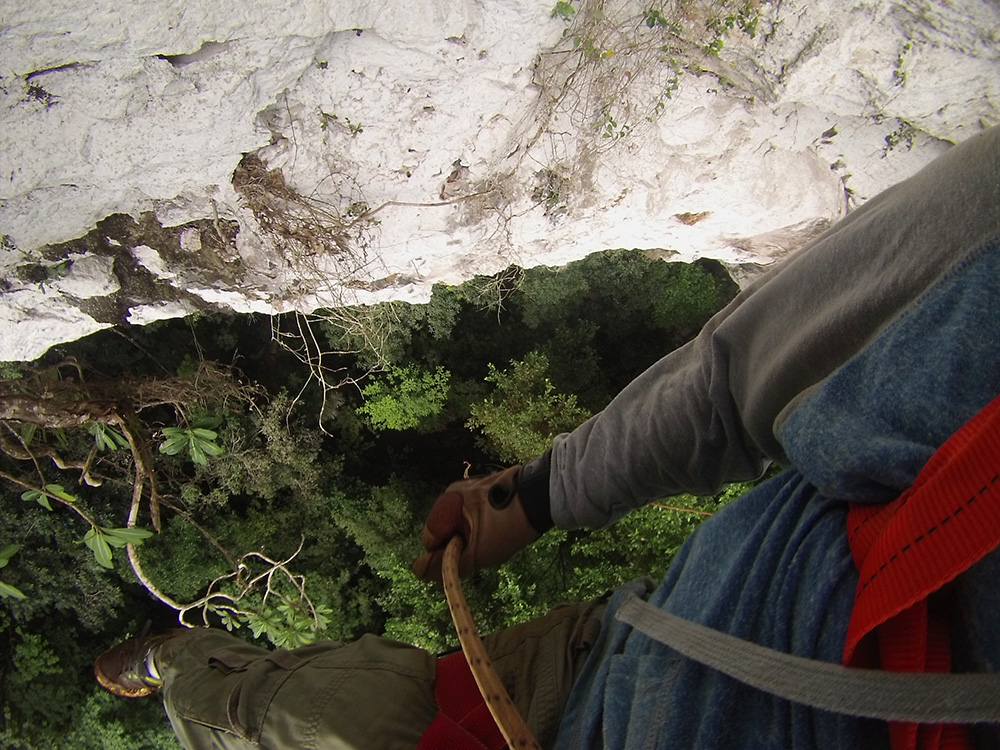 This happened for a lil bit until my fearlessness kicked in. “Wait – this isn’t really that bad.” Soon the steps got wider and the release of the rope – more freely.

After a short time, I was dangling in mid air. Wait – where’s my buddy? …. There she comes – making her way down to me. Alright – this is perfect time for some selfies. 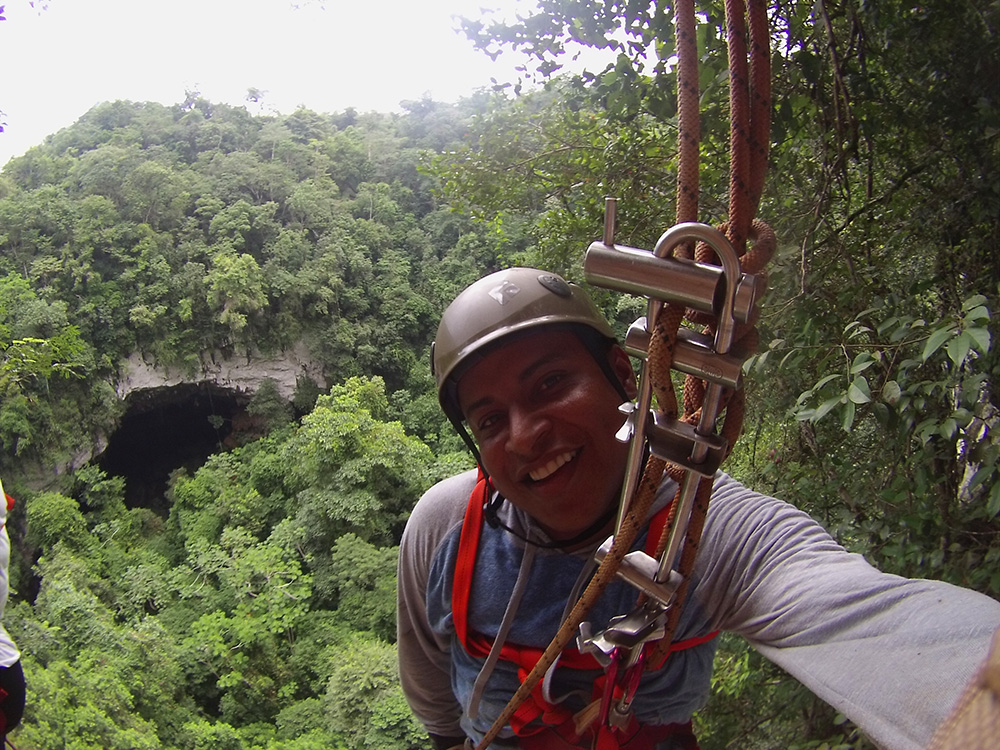 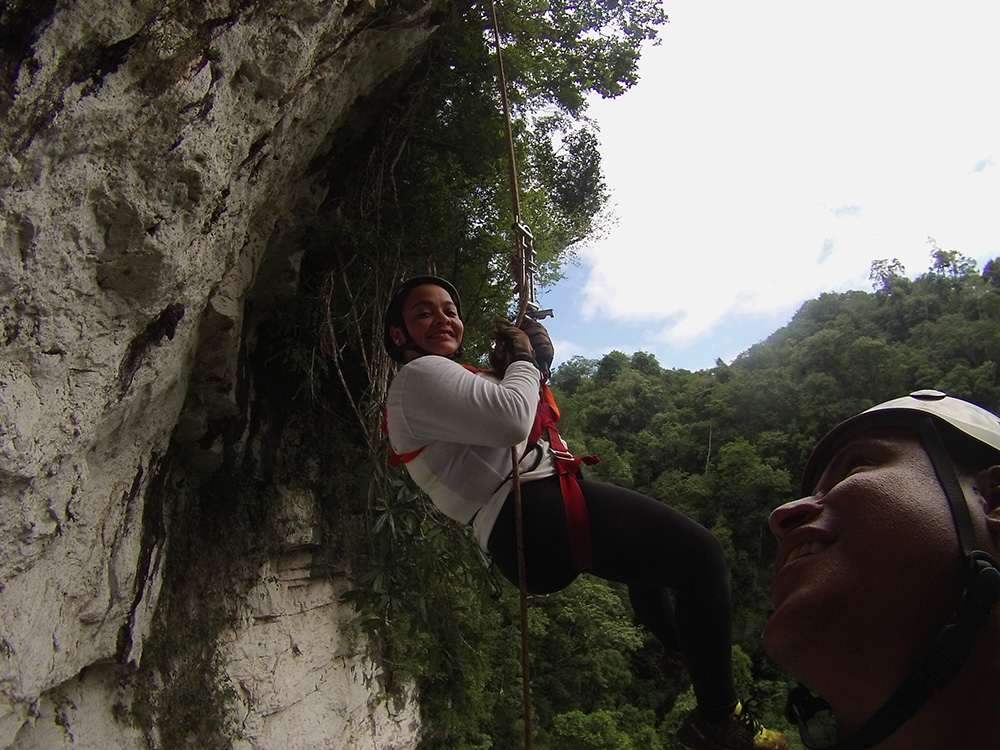 As we continued down the ropes – it became increasingly easier, until “whattya know” – we were at the bottom of the rock at the entrance of the cave. I must admit – this was quite an adventure –and I wished that the first few minutes of the repelling could be extended – the emotion and fear and adrenaline that is experienced. 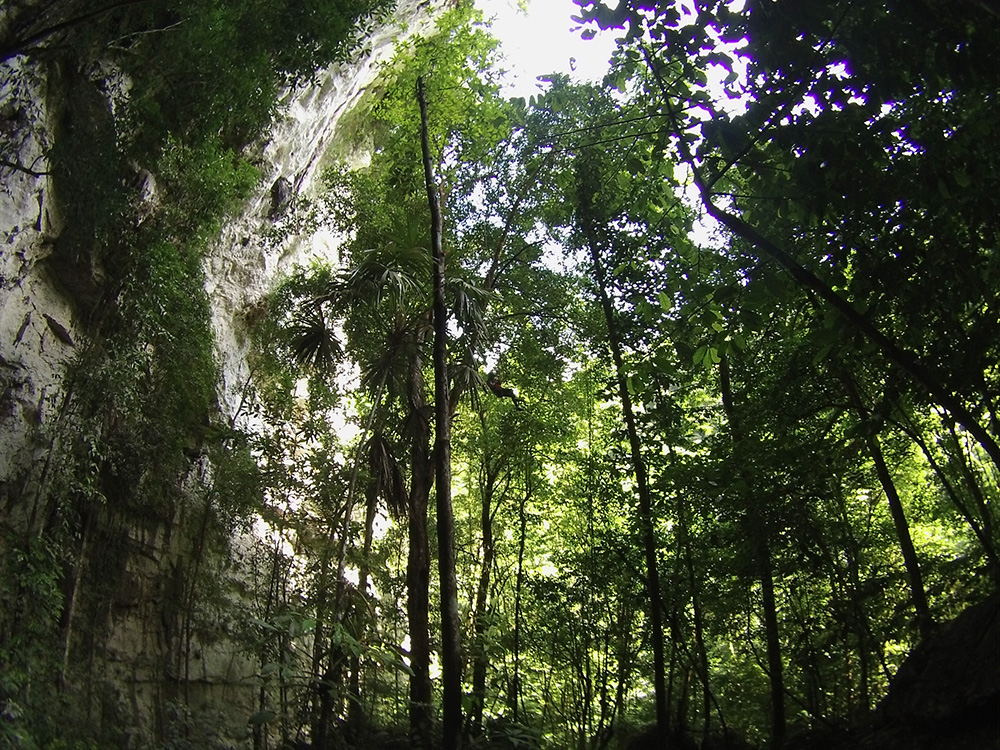 After we all made it to the bottom, our guide takes to a make shift table where she set up a lovely spread for lunch. I didn’t eat the meat but there was enough to choose from to come up with a delectable huge veggie burrito. 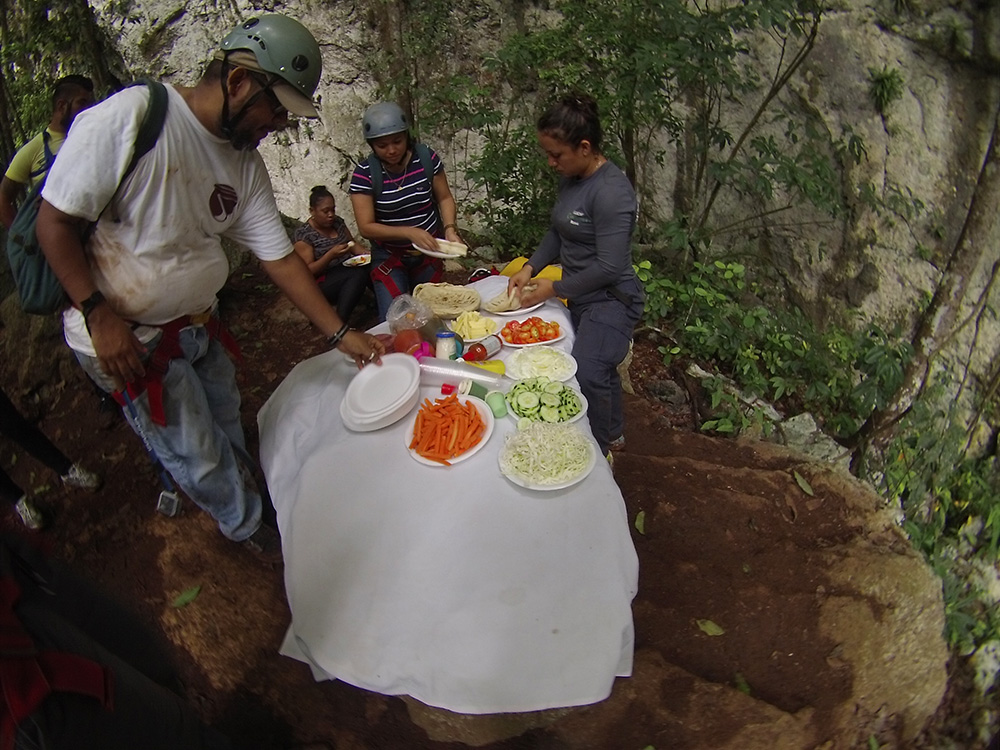 Following a hearty lunch and a break to rest up, we started our journey back.

The most adventurous part of this leg of the hike – is making our way back to the 300 feet point from where we had repelled. The scariest part – the very slippery and shaky (I believe intentionally) ladder that we had to climb as part of our ascent. 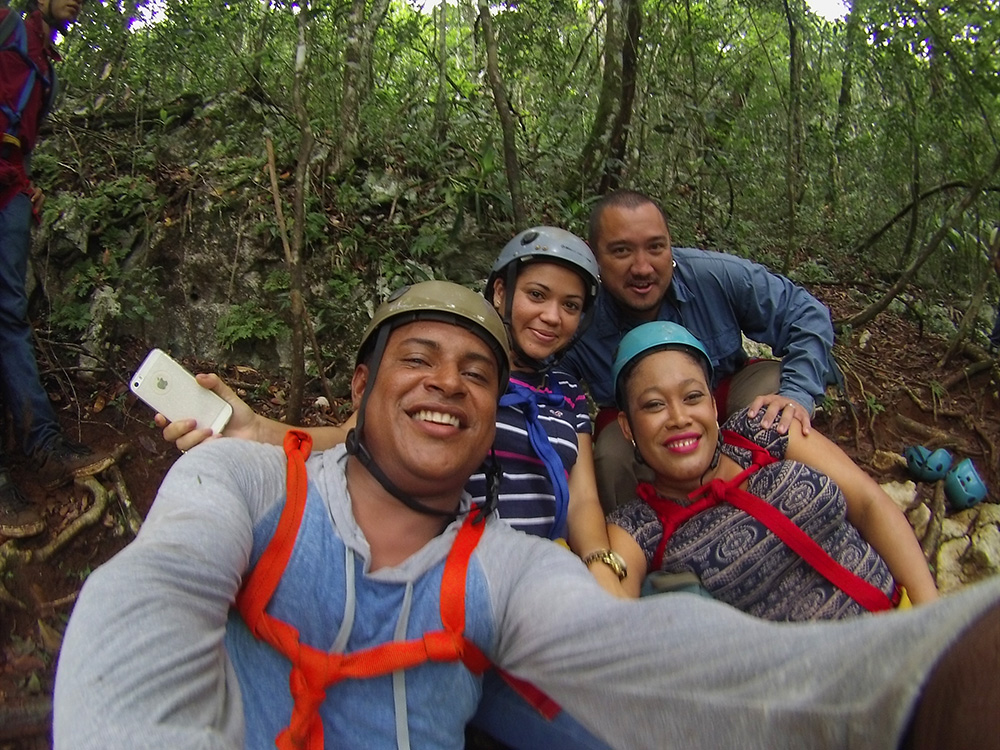 By the time we made it back to the van, my poor calves were screaming with ache. My muscles were so sore, they were shaking. Would I do this adventure again? Hellz yeah!!!!!’

On your next visit with us – visit our Concierge desk and we’d be more than happy to set you up on this fun filled, adrenaline rush activity!!!!!